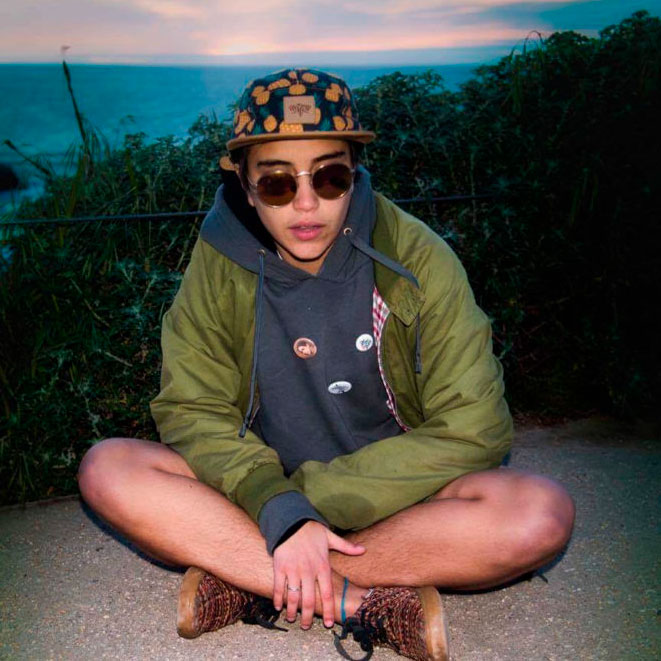 Saint-Hills is a young Brazilian music producer and singer, known for his unique electropop sound which contains strong influences of Brazilian music and culture. In 2015 Saint-Hills moved from his hometown Brasilia, Brazil to San Francisco, USA, where both his career and personal life took flight. In San Francisco, Saint-Hills produced and released his first single, “(Geo)graphy”. However, what many don’t know is that throughout his flourishing early career, Saint-Hills profoundly struggled with his gender identity. “Two things were on my mind 24/7, music and my uncomfortableness in my own body and gender, and how to find a solution for that”. After years of keeping his struggles to himself, he decided to live fully and authentically, coming out as a transgender guy in 2017.

Traveling is also a big part of Saint-Hills’ life and music. Apart from Brasilia and SF, Saint-Hills has lived in New York (USA), Sunshine Coast (Australia), and Rio de Janeiro (Brazil). “I always choose traveling over material things. I am the person I am today because my mother insisted in showing me that there are many different types of people in this world, and that there is no right way to be a person. Nothing cleanses my soul like hearing a new language or spending a few days in a place I’ve never been before, with new people, scents, and sensations”. This deep connection to traveling as a value and lifestyle can be observed in Saint-Hills’ first single, (Geo)graphy, which has a music video filmed in Peru and released exclusively by Red Bull: https://www.redbull.com/br-pt/cidada-do-mundo-conheca-a-saint-hills

This year, Saint-Hills and his music have received worldwide support and recognition from many people around the world through the release of his new single, FIRE. The song expresses the universal feeling that love can burn like fire. With references from Tom Jobim, Vinicius de Moraes, and Luís de Camões, Saint-Hills has brought the cultural heritage of the Portuguese language and Brazilian music to the spotlight. No matter which century you were born in, love can burn like fire, and is there any better way to heal the burning of FIRE than with “agua de beber”? Listen to FIRE and find out! 🔥
With over 15,000 hits on Spotify and listeners from over 55 countries, FIRE has been most successful in Madrid, Santiago, Mexico City, São Paulo, and Barcelona.

Saint-Hills is now DJ-ing in the Brazilian and queer music scenes of San Francisco and working on a self-produced EP with his pre-testosterone voice. It will be released in early 2018. Stay tuned!